Nicola Coughlan Takes Us Behind The Scenes At The SAG Awards 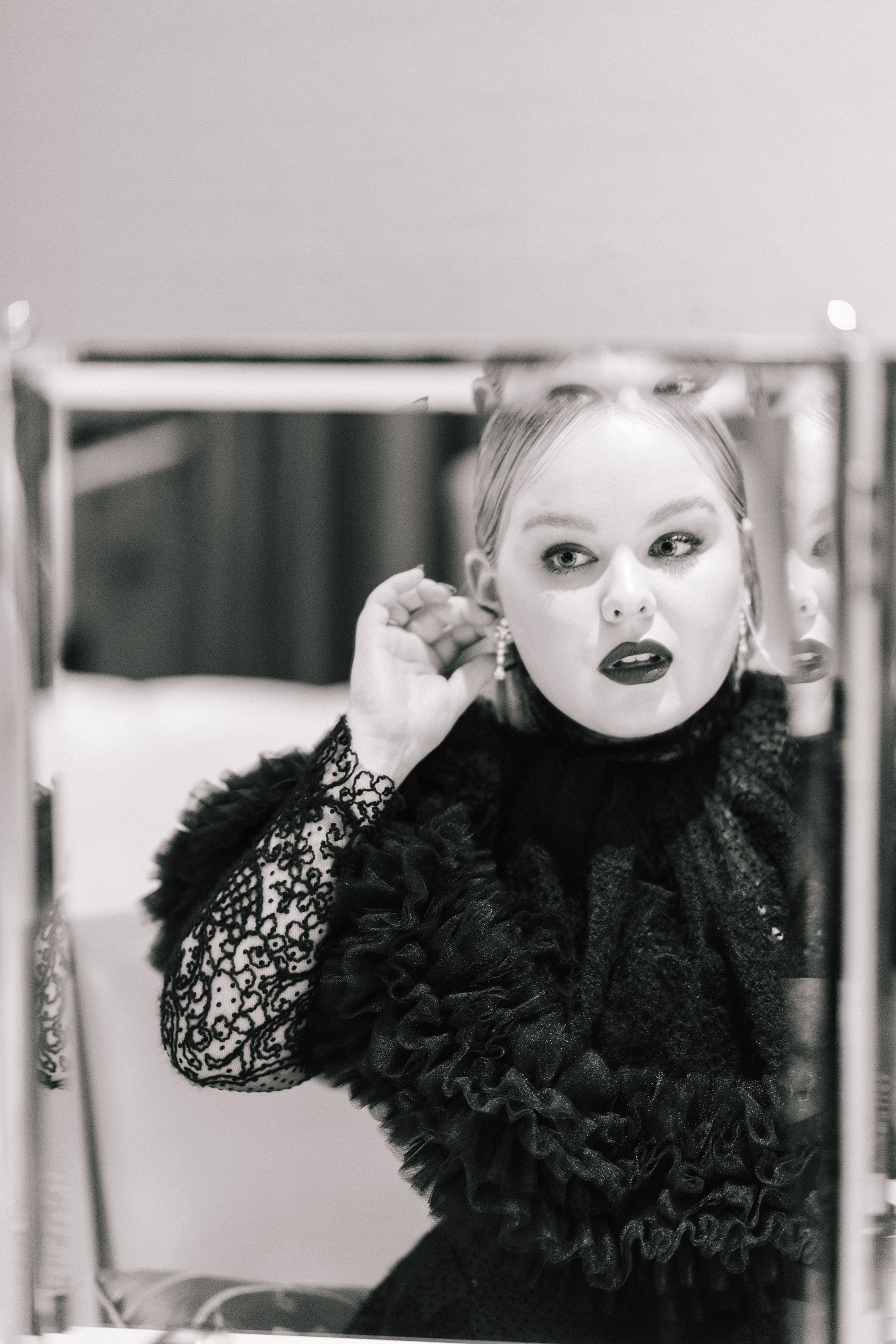 While 2021 has been much of the same for most people, Nicola Coughlan has had a pretty exciting start.

The Derry Girls actor won over a whole new audience, in addition to those who already adored the Irish star for her portrayal as the endearingly worrisome schoolgirl Claire, with her contrasting role as Penelope Featherington in Netflix’s biggest show – ever – Bridgerton.

Since the series’ Christmas Day 2020 release, the Shonda Rhimes-masterminded production has been a staple in living rooms across the globe (82 million in the first 28 days is the official estimate) and the cast has been adjusting to new levels of fame, including attending A-list award shows, even if they are held virtually.

The latest ‘red carpet’ moment for Coughlan has been the Screen Actors Guild (SAG) awards, which were held virtually on Easter Sunday (April 4, 2021). The Bridgerton cast were nominated for the ‘outstanding performance by an ensemble cast in a drama series’ award, though missed out to their Netflix colleagues, the cast of The Crown.

As the star got ready for the event at London’s Corinthia hotel, for which she wore an enchanting bespoke gown by Christian Siriano, Jimmy Choo shoes and De Beers jewellery, Coughlan chatted with ELLE UK about all things Bridgerton – including cast WhatsApp groups and the SAG nomination – her red carpet style evolution and Kim Kardashian becoming a ‘Bridger-stan’.

What was your reaction to being nominated for a SAG award?
‘Getting nominated for a Screen Actors Guild Award is a really special one, honestly, because to be acknowledged by your peers and people you admire so much feels extra special. It was so unexpected – I remember I was walking in the park with my sister when I started getting texts in the Bridgerton (WhatsApp) group. I wasn’t even following the nominations, that was so exciting.

Do you get nervous before award shows?
Yeah I do, it’s very intimidating. When they’re in real life and you have to stand in front of a bank of photographers, I don’t think that will ever not be terrifying. But for the virtual ones, it’s been okay, because there’s a bit more safety. But yeah, they definitely can be nerve wracking but they’re always fun.

What other SAG award nominees blew you away this year?
Definitely I May Destroy You, I just thought it was so groundbreaking, so brilliant. I love when you watch a piece of television, and it just blows your mind. It was like something I’d never seen before. I think Michaela Coel is such a visionary and she’s someone that you’re always so excited to see what she’s going to do next.

Tell us about your dress for the SAG awards?
I’m so excited about my dress! It’s a custom piece by Christian Siriano. I can’t even believe I’m saying that but it is. He sent over some amazing sketches and I’d spoken with my stylist Aimée (Croysdill) about how I wanted to do a really dark, gothic look because it was something we hadn’t done before. When the dress came, it was everything and more, and it was just so fun to put it all together. It felt like such a moment for us all. 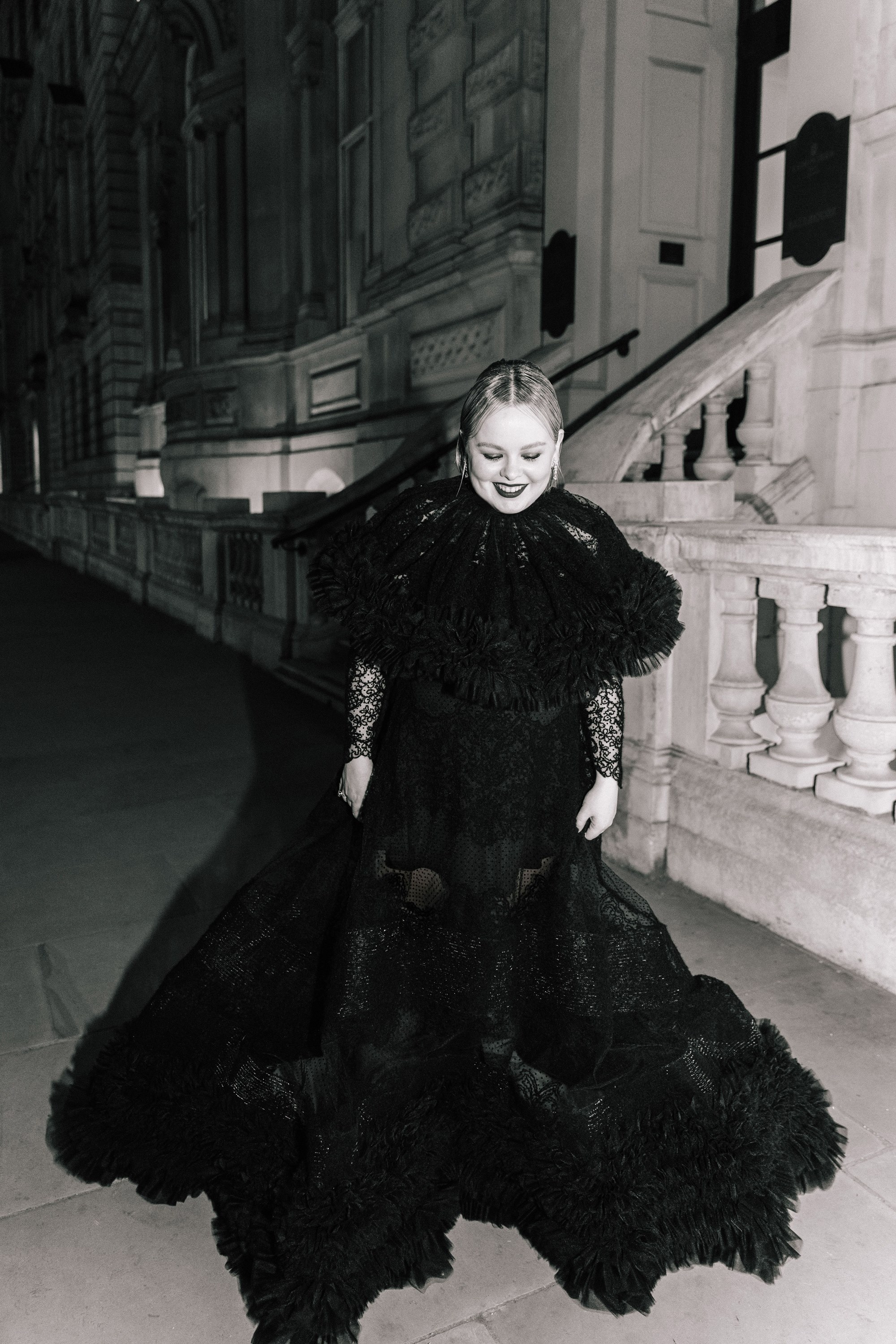 How has your style evolved over past few years?
It’s evolved so much. In the beginning, when Derry Girls came out, it was a success very quickly which was amazing but I was terrified to go to events and dress up. I just thought, “oh god, you’re going to be so judged”, so I threw on whatever from my wardrobe but I never felt fully confident. And then I had the opportunity when Bridgerton was coming round that I thought, “No, I’m just going to have fun with this, and express myself”.

It’s been such a brilliant journey, it’s been so much fun and I feel more like myself than I ever have, which is a really special thing that fashion and style can can make you feel that way.

Whose red carpet style do you always admire?
I would say Zendaya, I think she’s amazing. She always really embodies whatever look she wears and [the outfits are] always really distinctive and different. I think so much of her comes through [her style], but also, she really brings character. I remember at the Met Gala when she had the Joan of Arc look, the look is so thought through from head to toe and I always love that about her.

Are you regularly keeping in touch with your Bridgerton castmates throughout awards season?
Yes, there’s a WhatsApp group – there’s actually two now, one for season one and one for season two because we have new castmates which is really exciting.

The castmate I speak to most is Claudia Jessie, who please Eloise. She doesn’t have social media so I send her a lot of the Bridgerton fan art and the memes.

Did you see that Kim Kardashian finally started watching Bridgerton, after you recommended she do so?
I did and I was so excited because I’ve always been a big fan of Kim and I love [Keeping Up With The Kardashians] so that just absolutely thrilled me. I remember waking up and looking at my phone one morning and seeing it on her Instagram I thought “oh my goodness, Kim’s a proper ‘Bridger-stan’ now she’s really into it”.

But also, it was funny because Kim has more connections to Bridgerton than maybe she realises in that Mr Pearl made her corset for the Met Gala and then the very next corset that he made was mine for Bridgerton. Also, the Featherington family were sort of based on the Kardashians, which our costume designer Ellen Mirojnick very much modelled us around. There was one very ambitious mum and her three daughters, who were all very different. I would like to think Penelope is the Kim, I’m just going to claim that she is.

Since the show came out, what has been your biggest fangirl moment?
Just seeing people I really love and admire talk about the show, like Billy Porter who I idolise. Drew Barrymore is a fan of the show and she followed me on Instagram and that just like blew my mind, I didn’t know what to do. It’s just been amazing.