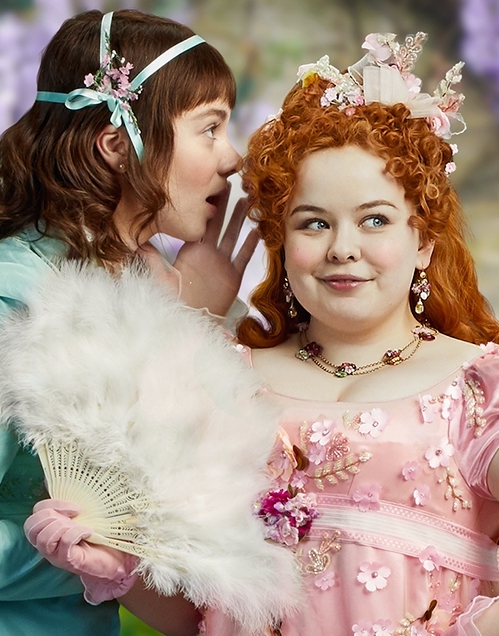 The British period drama has long been the domain of white actors, but the genre is getting an inclusive update in recent years: Mary, Queen of Scots featured Gemma Chan as Bess of Hardwick in 2018, Dev Patel played the eponymous hero in The Personal History of David Copperfield this year, and Jodie Turner-Smith is set to play Anne Boleyn in a new Tudor series. Slowly but surely, actors of color are becoming period fixtures, and Netflix and Shondaland are adding historical romp Bridgerton to the list. (Though there was certainly no danger of a white-washed cast with Shonda Rhimes serving as executive producer.)

The series is based on Julia Quinn’s romance novels and feels like a Gossip Girl meets Pride & Prejudice fantasy mash-up, with Julie Andrews as the narrator. Set during Great Britain’s Regency era, the revisionist history series follows the eight siblings of the powerful Bridgerton family as they navigate love, sex, and duty in high society. Black actors not only play leading roles, as with Rhimes’s series Scandal and How to Get Away With Murder, but are also positioned amongst the highest rank of the aristocracy.

Bridgerton has all the elements of a modern romance series set against the backdrop of polite society. The orchestral sounds of Ariana Grande and other contemporary pop stars soundtrack the cast as they move through their high drama and petty grievances in eye-popping costumes. “The characters are in psychedelic greens and yellows and colors that would absolutely not be accurate of the period but the cut is of the period,” says Andoh. “It’s a way of making things more vivid and that more extravagant.”

It certainly adds to the escapist feel of period dramas, often fairytale-like in depicting the social customs, fashion, gender politics, and etiquette of the distant past. But as it contends with issues of relationships, sexuality, sexual desire, and equality, Bridgerton feels very much of the present. “The show is so engaging—not only do you see yourself in it because it’s diverse, but also, it’s telling stories that are so relatable in the 21st century,” says Dynevor. “It’s lovely on the eye but also touching on all the themes that are so relevant today.”

This fresh approach appealed to Derry Girls star Nicola Coughlan, who brings her best clipped English accent to Penelope Featherington, the daughter of a rival family and best friends with one of the Bridgerton sisters. Coughan tells Elle:

Sometimes I’m drawn away from period dramas because they feel very referential and the dialogue feels out of a playbook. You’re like, well, I’ve seen this before. But Bridgerton felt very sharp and sparky and modern and fresh.

The Irish actress is no stranger to this new brand of period drama—she appeared in season 2 of the steamy Victorian-era comedy Harlots. But when she first started out, the genre didn’t feel accessible. “There was quite a narrow view for a certain time when I left drama school—it was very much, do you fit into this box, or do you not? Okay, you don’t. See ya! You’re not getting the job,” she recalls. “I think it’s starting to build [up], and the thing that really needs to be addressed in conjunction with roles for women is more diversity onscreen. It’s not advancement for women if it’s not an advancement for all women.”

Bridgerton is definitely flying the flag for equal opportunity orgasms, with several hot and heavy moments to make audiences blush. But in a post-#MeToo world, it’s become increasingly important for actors to have a safe space to perform these scenes. This was a fundamental requirement for the series, and the actors rehearsed with an intimacy coordinator on set.

There are eight episodes in Bridgerton season 1, which takes its cues from Quinn’s first installment The Duke and I. But with eight novels in the series to work from, there are plenty more stories waiting to be told—and a television universe prime for expansion.