Bridgerton’s Nicola Coughlan Is Ready To Make An Entrance 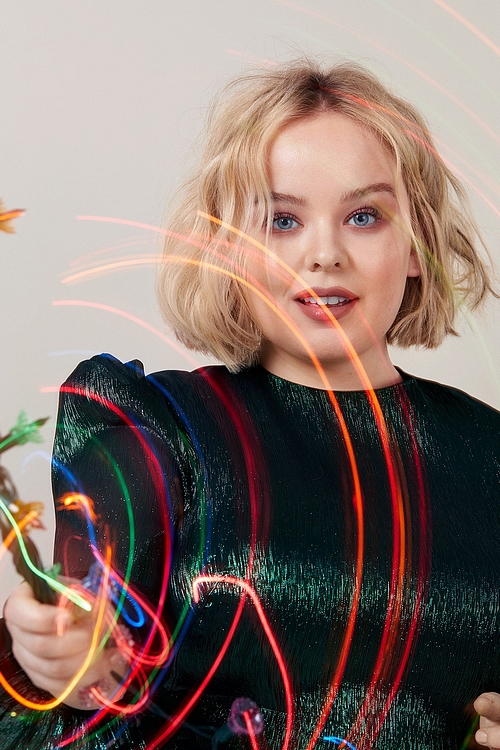 Like everyone else, Nicola Coughlan reads DeuxMoi, the celebrity gossip Instagram account run by an anonymous, seemingly all-seeing figure. While for many, blind items about breakups and the bad behavior of the rich and famous are merely a lurid diversion, for the actress, currently starring in the new Shonda Rhimes-produced Netflix romance Bridgerton, there’s another level of life imitating art. Based on the wildly popular novels by Julia Quinn, Bridgerton paints a steamy portrait of two high society families whose lives are upended by the sudden appearance of an anonymous, seemingly all-seeing gossip columnist named Lady Whistledown. Apparently, the only place a well-informed shadowy figure could have more power than contemporary Hollywood is the corseted, competitive world of Regency London, where spilling the tea means something altogether different.

Coughlan plays Penelope Featherington, the meek youngest daughter of a family of strivers whose presence on the cutthroat debutante scene is overshadowed by the boisterous Bridgerton family and their exploits—which are always showing up in the pages of Lady Whistledown’s paper. At a time in history when women had precious little say over their lives, the balls and their attendant courtships were both a lifeline and a cage for people like Penelope. “These people had no agency,” Coughlan tells ELLE.com. “The girls were essentially property of their father until they were property of their husbands. There was no choice in that.”

Lady Whistledown’s transgressive presence creates new problems and new possibilities for all the characters but most especially the women, adding a brightly colored, modern sensibility to a reality that, historically, was much more gray. The series has the romantic fantasy of the Rhimes-penned Princess Diaries and the high stakes drama, passion, and intrigue of her flagship Grey’s Anatomy. Created by Chris Van Dusen, with production design by Will Hughes-Jones and costuming by Ellen Mirojnick, the series has a visual style that Coughlan calls “mind-blowing.” The cast wears elaborate custom gowns and wigs that took months to create. Soon after booking the role, Coughlan was whisked off to a three-hour fitting in London, like a montage out of a fairy tale. “I’ve never had more measurements taken. They drew outlines of my hands to make gloves. They were draping fabrics, different types of silks, different shades of yellow.” In the series, she’s bedazzled in Swarovski crystals and wears a custom corset designed by Mr. Pearl, who’s worked with the likes of Kim Kardashian. 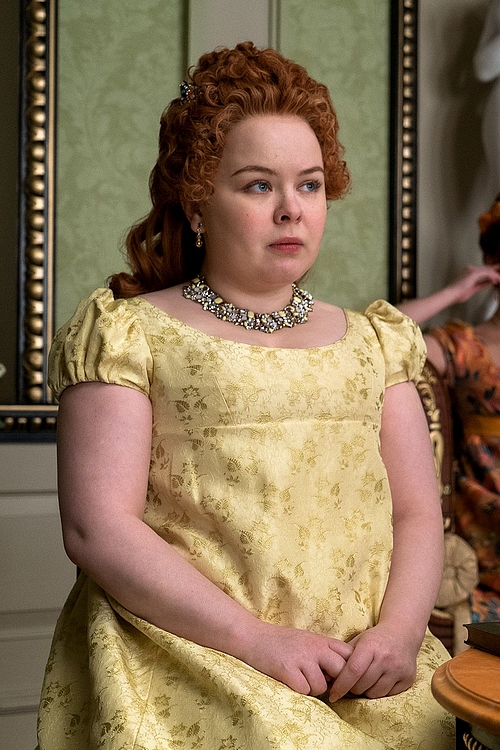 This is Regency London with the bling of the VMAs. “You feel like you’re wearing works of art every day,” Coughlan marvels.

While viewers will be swept up in the romance between Bridgerton daughter Daphne (Phoebe Dynevor) and brooding duke Simon Basset (Regé-Jean Page), Coughlan arguably delivers the heart of the show as a passive wallflower who comes into her own. “She’s got a really rich inner life. She truly is very sweet and kind and open and hopeful. But then, she comes from this family that is really acerbic and tough and quite bitchy. There’s the nature/nurture question that I had to think about. There has to be a level of that Featherington that’s in her.”

For the Irish actress, the juicy role of the reluctant debutante who’s more than meets the eye is its own coming-out party. While Coughlan is already known for her comic turn as the anxiety-ridden Clare Devlin on Derry Girls, Bridgerton’s built-in fanbase and 190-country Christmas Day launch is poised to boost her into a whole new phase of her career. “It’s really hard to wrap your head around,” she admits readily. “Four years ago, I still had a part-time job. I was working in an optician’s. I was living at home with my parents.”

Though she got her first acting gig at the age of 9, Coughlan’s pre-Derry years were the kind of doubt-filled waiting game that plague the careers of many performers. “My 20s were crazy tough,” she says. “I was broke all of the time. If I wanted to buy a coffee, I’d be terrified my card would get rejected. It was all that stress.” Still, acting was the only thing that made her heart sing, so she kept at it, training at the Oxford School of Drama and Birmingham School of Acting and making inroads in theater productions. It’s a driven, scrappy feature of her career that still hasn’t worn off, even as she finishes her second full day of Zoom interviews for an international television series. “Because I come from a background in theater and doing little fringe plays, and wondering if 20 people would come to see it, I think that hunger and fear don’t leave you,” she says. “I’ll always have that motivation and drive to be like, ‘Please come and see my play.'” 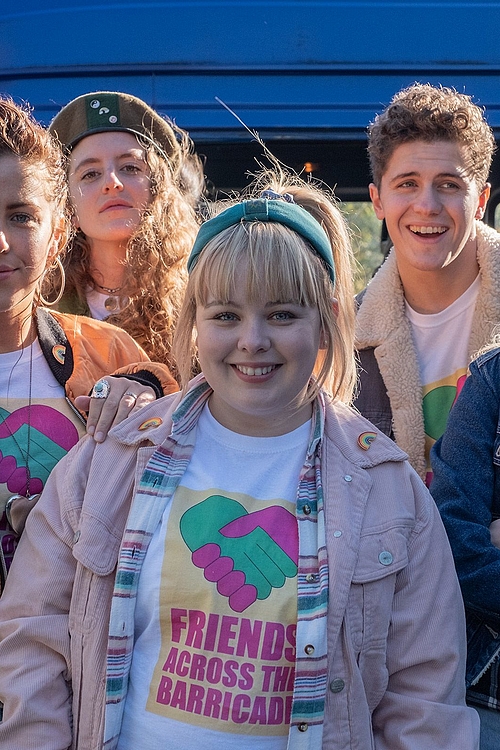 There’s little doubt people will come and see Bridgerton. The series has been in Netflix’s top 10 since its release last week: Quinn’s books have a loyal readership eager to see the screen translation, while Rhimes’s track record is legendary. Bridgerton, like a Regency ball’s most admired debutante, couldn’t be better situated. To hear Coughlan talk about being part of the series calls to mind a kind of wish fulfillment, the happily ever after we tune into shows like Bridgerton seeking. When she picked up Rhimes’s bestseller The Year of Yes during her trying early acting days, she never would’ve thought that one day, she’d get to tell the mogul how much her words meant to a struggling actress. “I really held her hands like Oprah does to people,” Coughlan says of their first encounter at the Shondaland offices. “I had never done that to anyone in my life. There was a voice in my head that kept saying, Let go of Shonda Rhimes. This is weird. But she couldn’t have been more gracious and lovely.”

Though her life has changed remarkably, Coughlan’s personal year of yes has taken the same detour everyone’s else’s has for the last nine months. But she counts quarantining with her mom in Ireland as helping to keep her grounded. “She makes me do all the cooking, the cleaning. I’ve been painting walls. I’ve been laying flooring. I’ve been cleaning toilets. They have no problem putting me to work.” Whether the work is home renovation or onscreen romance, Coughlan is quick to express humility and wonder at the place where she finds herself. “I thought, ‘What if you get the job you think you’ve always wanted and it doesn’t fulfill you?’ But it really does. That will never not be a privilege for me.”