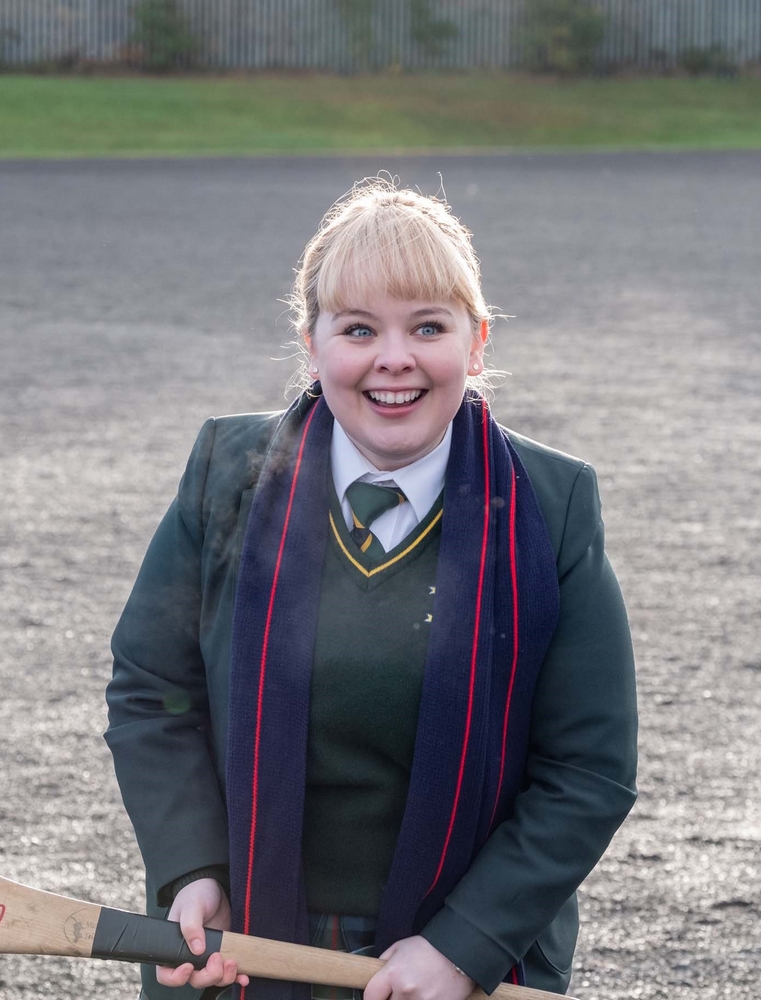 You play Clare – explain a bit about her.
I always think of her as a bit of a Machiavellian genius. Lisa said she wanted to give her a really sensible first name, with a surname that implied she had the devil in her. Because she’s a geek, but she’s not a nice geek. She’d happily sell her friends down the river if she needed to. She’s quite ambitious. I’ve met the real-life girl Clare was based on. It was such a bizarre experience. In this job, you meet a lot of people off the television, and famous people, but I was way more star-struck meeting the real, actual Clare than I was meeting any of those other people. I think she’s got a lot of good intentions – I think Clare and Erin think they’re the really moral, high-ground-based people, when in fact the other three are a lot more morally sound. But at the same time, I think Clare has a lot of love for her friends – it’s always fun to see the dynamic between Clare and Michelle, because they’d never be friends if it wasn’t for Erin. And in this series, I think you’ll get to see more of her relationship with James as well, because they’re both kind of the nerds of the group.

Does the real Clare know that she was the inspiration for this character?
Yes, and I don’t think that she was flattered in the beginning. I think Lisa McGee got a call that said “Am I that wee crying one? The one that’s whingeing all the time?” So, she wasn’t absolutely thrilled at the beginning. And apparently, she went into work the day after the first episode aired, and all her friends were like “You’re Clare.” When we had a drink, she said to me “I was the original ‘Shite-the-Tights’.” What really makes me laugh is that since the show has gone to America, people think we’re saying “sugartits”.

The first series was a phenomenal success. When did you realise it was going to be a hit?
I knew the script was really special from very early on. As soon as I read the line “I’m not going to be an individual on my own,” back in 2016 when I first got the audition script, it really stood out. It just bounced off the page. I had a really strong connection to the script right away – I remember saying to my sister “I feel like I’m gonna get this job, I feel like I have a connection to it.” And even though I didn’t get the part for another six months, I’ve never wanted a job more than I wanted Derry Girls. And then, while we were filming it, we were doing a scene in a shop, and I just felt a real electricity and thought “This is going to be good.” And then when I sat down and watched it with my family, my phone just exploded. We were trending worldwide. It was just mental. I still can’t believe how successful it’s been.

How has the show gone down in Ireland?
I was living in the UK for most of last year, so I was hearing about it, but I don’t think I was fully prepared. Jamie-Lee still lives in Derry, and she was like “I can’t leave the house!” And I assumed she was exaggerating. But when we went to Belfast to film parts in series 2, we couldn’t leave the house. People followed us round if we went shopping. People wanted photos, and then there were paparazzi photographers, and 200 people watching us film in the street. I’m not from Derry, I’m from Galway, which is quite laid back, quite a hippy town, so people were more like “Well done!” But what was weird was I went to New York with Louisa two weeks ago, and people there were coming up to us talking about it. It all feels so surreal. But then I go home and my mum makes me do the hoovering and gets mad at me for staying in bed too late. So that grounds you in reality.

It’s been a whirlwind year – you were also named as an up-and-coming star by the Evening Standard magazine. How did that feel?
It was really mad. When my agent called and told me, I thought it was a joke. To be on a list with someone like Jodie Comer, who I so admire, is amazing. It was a huge honour and it was nice to have be included for my work on Jean Brodie. It’s nice to know people like my work in other roles aside from Clare. 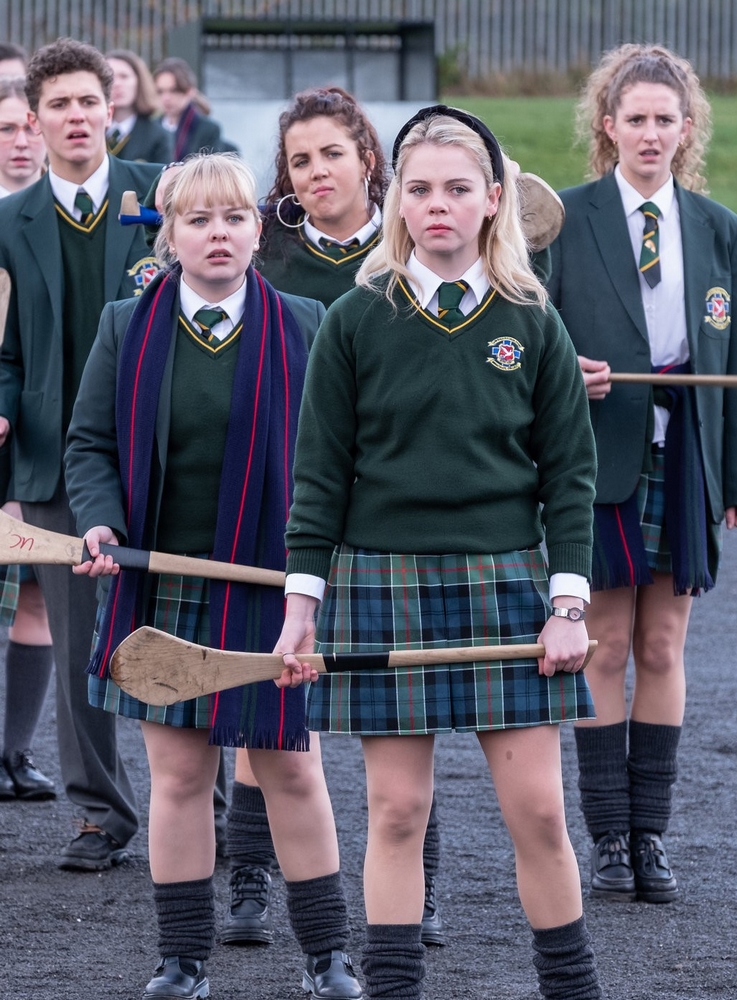 Clare came out to Erin in the last episode of the first series. That must have been a really great storyline for you?
I knew Clare was gay from when I very first got the audition. So that was back in November 2016. But the other girls and Dylan didn’t know until they got episode 6, which would have been in May 2017. I just assumed that everybody knew it. They were all so shocked! It was life imitating art, in a way – I had known all along, and they were really shocked about it. I tried to play it subtly throughout the whole series. It wouldn’t have been a good reveal if it had been very obvious, but it wouldn’t have been true to the character to not have it in mind all the time. So, things like David Donnelly is meant to be the hottest guy in Derry, but Clare had literally no interest in him and just wants to get on the school bus. And Charlene Kavenagh is the prettiest girl in school, and Clare kind of stands behind Erin and waves nervously. I always had it in my mind, because it’s such an important part of Clare and who she is.

How will the story develop this season?
I think the first thing that someone says to Clare in the series references it. But they’re a bunch of losers, I don’t see any of them as great lovers. But I think people will be very happy with how Clare develops, I think she’s a bit freer in herself this time around. I think the whole series feels a bit freer. Siobhan [McSweeney], who plays Sister Michael, says that this series feels like Derry Girls, but in Technicolor. I think everyone was a lot more confident and knew the characters much better. There was a certain amount of tentativeness from us all in series one. We knew there was a lot riding on the show, and we didn’t know if people were going to like it. There were times when we maybe didn’t take the risks that we could have taken. But I think now we feel like we know the characters more.

I imagine 1990s Northern Ireland wasn’t an easy place to be gay. Is that reflected in the story?
I think Lisa’s been really clever about it. She turns a lot of ideas about Northern Ireland on their head. Northern Ireland can be viewed as quite a conservative place, but she flips that over and shows how much Clare is loved and welcomed within her friends and family, and Erin’s family. And she showed it in the last series, with all the references to James being gay.

What did you think of the end of the last scene in the first series?
It was so beautiful, and I felt it was beautiful from first reading it on the page. I got chills just reading it, sat in the offices, just before we moved to Belfast to film. Jamie-Lee was in a costume fitting, and I didn’t know her very well, but she came out and I said “You’re not going to believe how it ends, you’re just not going to get over it.” And when we filmed it, it felt really special. We’d not seen Louisa do that dance, and she’s such an incredible actor and so professional, and she put so much into it. And they cleared all the supporting artists out, so it was just us sat there watching her do it. And I just bawled, I couldn’t stop crying. And then, when we ran up on the stage everyone at our monitors was crying, so it felt so special. But then in the waiting period between filming and screening, we thought “God, I wonder if that’s going to come across.” Because it’s not a comedy drama, it’s a comedy, so if you’re going to earn those moments you’ve really got to work for it. And I think the director, Mike Lennox, did it so well. Mike and Lisa work so well together. I watched it in a pub in London with Lisa and Liz and Siobhan and a friend of mine, and I just cried and cried. I thought it was so beautiful. And people forget that this is what Lisa went through. That was the reality for people, this stuff was going on. I’m so proud of that scene, I can’t watch it back without crying.