﻿ Nicola Coughlan Celebrates Clare’s Coming Out Storyline: “For me it was always part of her” « The Dazzling Nicola Coughlan
Home Nicola Gallery Career Press Online 

Nicola Coughlan Celebrates Clare’s Coming Out Storyline: “For me it was always part of her”

Ahead of series two, the actor says she and co-star Saoirse-Monica Jackson were unsure how the series one finale would go down with viewers 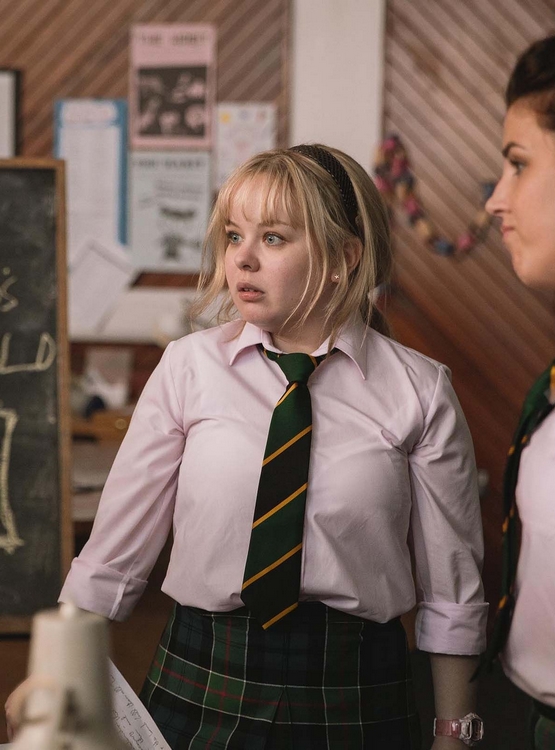 Derry Girls writer Lisa McGee has a knack for dealing with serious issues through comedy.

It’s part of what makes her series – a 1990s-set sitcom about a group of selfish Catholic teenagers in Derry – so brilliant.

Without lessening the importance of the Troubles, she puts normal life at the forefront, allowing political violence to fester in the background – present, but not all-consuming.

But the series one finale presented a real challenge for her stars, not least Nicola Coughlan, the Galway-born actress who plays Clare.

The episode saw the 16-year-old goody-two-shoes come out as gay to her friends, only for Erin (Saoirse-Monica Jackson) to react with indignation, urging her to “go back in” to the closet. Tensions were resolved by the end of the episode – but it was surprisingly tense at times.

“Saoirse and I were terrified,” Coughlan tells RadioTimes.com ahead of the release of series two.

“It would have been a lot easier if it was that scene in a drama series, because you would have played it totally straight. But we were like, ‘How are we going to do this without it seeming like we’re making fun of the wrong parts of it, and not honouring the fact that this is a struggle that so many people go through?’”

While she was initially nervous about the storyline, her faith in McGee’s writing has paid dividends. In the months since the finale aired (and the weeks since the entire series arrived on Netflix outside of the UK and Ireland), plenty of fans have messaged to say that her depiction ran true.

“[Director] Mike [Lennox] and Lisa [McGee] had a really clear view of what they wanted so we just trusted them. But I didn’t know how it was going to be until I actually saw it, and then I’ve gotten so many nice messages from people like, ‘I’m gay and watching that really resonated’. And that’s so lovely, it’s such an honour.”

Coughlan explains that she knew from the very beginning that her character was gay, even if her co-stars didn’t.

For me it was always part of her, because I had known when I got the character briefing. I knew Clare was gay, but I didn’t realise the others didn’t know. It was not intentional that I was keeping it from them, but I’d known for six months that Clare was gay, and then the others found out.

She worked it into her character in subtle ways throughout the first series, too.

“I had to be careful with how I played with it in series one. There were little bits and bobs of things, where I was like, ‘OK she doesn’t give a shit about David Donnelly, she’s not really interested in him’. And Charlene Kavanagh, ‘OK she’s really pretty’. It was important that I always knew it.”

The episode ends with the gang dancing together at a school talent show, with Clare and Erin having resolved their brief falling out.

“What’s really nice about it is I think you see, aside from Erin and her reaction to Clare, you kind of saw that they all immediately accepted it in a way,” she says.

Clare’s story will continue in series two of course – and Coughlan reassures fans that it will still remain true to life.

“It’s referenced in the first thing someone says to Clare,” Coughlan says of the series premiere. “So it’s definitely there. I don’t think anyone is going to be disappointed. I think people will be very happy.”